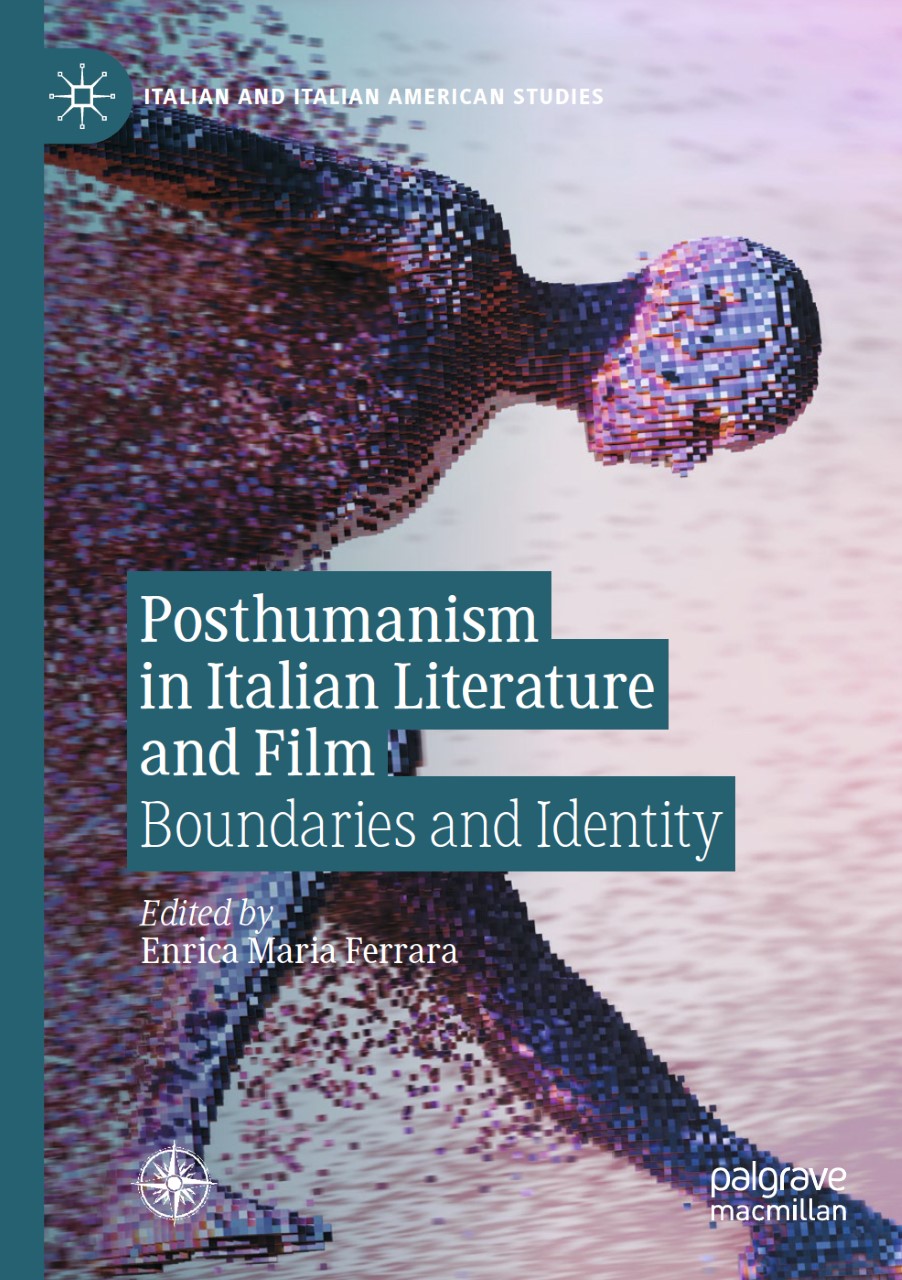 What do Giacomo Leopardi, Filippo Tommaso Marinetti, Italo Calvino, and Elena Ferrante have in common? Enrica Maria Ferrara’s new volume (Palgrave Macmillan, 2020) places these authors at the center of contemporary posthumanist discourses, by proposing that they share a concern with decentering the human subject and challenging human-non-human binaries. In her introduction, Ferrara traces the philosophical and literary lineages of posthumanist discourses within the Italian intellectual tradition, arguing that Italy is the «nest of posthumanist culture» (p. 14). Ferrara supports her claim through an examination of two specifically Italian philosophical trends: feminist thought, specifically Luisa Muraro’s ‘pensiero della differenza’ and Adriana Cavarero’s «relational ontology» (p. 14), which destabilize unitary and consistent views of the subject; alongside Gianni Vattimo’s ‘pensiero debole’ and Giorgio Agamben’s exploration of biopolitics, both of which highlight the limits of western metaphysics and the humanist tradition. The essays included in the volume explore, from a variety of theoretical perspectives and methodologies, how these philosophical traditions have led to a radical «repositioning of the intellectuals as creators of knowledge» (p. 17).

The volume is organized into three parts, each comprised of four essays. The first part, Becoming Posthuman, explores the process through which humanistic views of the subject are upended, both in the historical continuum that connects Leopardi’s Zibaldone to Ferrante’s Neapolitan ‘quartet,’ and through the different processes through which a posthuman subject develops in literature. Gianna Conrad considers Leopardi’s «ecological system of infinite possibility and multiplicity of absolutes, swarming with hybrid identities generated by interactions of human and nonhuman entities» (p. 17). Alberto Godioli, Monica Jansen, and Carmen Van den Bergh examine Pirandello’s posthumanist modernism as emerging from his «awareness of animality as a continuum encompassing both the human and the nonhuman» (p. 52). Marco Amici’s essay steps into the twenty-first century to analyze Laura Pugno’s fiction and its «awareness and perceived necessity of re-calibrating the relationship between human and nature» (p. 74), which leads to «a complex, unresolved process» (p. 87) of posthumanist interrogation. Ferrara’s essay on Ferrante’s Neapolitan novels moves from the concept of ‘smarginatura’ – the loss of boundaries between the self and the world that Lina experiences at critical times – to the «digital notion of authorship – dispersed, polyphonic and collaborative» (p. 112), which Elena Ferrante’s own elusive authorial identity signifies.

The essays in Technology and Identity analyze works by Italian writers who foreground the interactions between humans and digital technology. Giancarlo Alfano discussed the evolving relationship of market, readership, and author in Italian poetry in the digital age. He emphasizes the sociological notion of ‘prosumer’ – the reader as simultaneously producer and consumer (p. 124) – embedded in the interactivity and multiplicity of digital publishing platforms. Kristina Varade’s essay focuses on fictions that, by integrating digital technologies like the cell phone, lead to literary experimentations that are singularly appropriate to contemporary life, such as transmedia storytelling. Eleonora Lima explores works by Luciano Bianciardi and Tiziano Scarpa, to show how their opposite approaches to technology and gender do not simply reflect social and cultural views, but contribute to constructing their meaning within the posthuman shift (p. 20). Anna Lisa Somma and Serena Todesco’s chapter expands the discussion of cyborg reproduction through an analysis of Viola di Grado’s Bambini di ferro, which utilizes the resources of speculative fiction to explore the meaning of android maternity.

The last part of the book, Boundaries of the Human, examines the shifting boundaries between human subjects and other entities, including non-human animals, plant and mineral life, and the products of technological innovations. Eugenio Bolongaro probes Aldo Nove’s posthumanist project in relation to civic impegno; Enrico Vettore adopts an ecopsychological approach to Gianni Celati’s 1980s work, reading it as a call to recognize the enmeshed nature of humanity and its environment. In his essay on the zombie in 1980s Italian pop culture and cinema, Fabio Camilletti sees the figure of the undead as a metaphor for the social tensions that remain unresolved under the surface of disimpegno and consumerism. Paolo Saporito’s chapter focuses on the relationship between the female body, the environment, and the cinematic camera in Antonioni’s trilogy of alienation, drawing on Karen Barad’s agential realism.

Ferrara thoughtfully situates the volume within the larger philosophical and scholarly context, from the posthumanist thought of Roberto Marchesini and Francesca Ferrando, to Italian ecocriticism and animal studies, pioneered by scholars like Serenella Iovino, Elena Past, Deborah Amberson, and Enrico Cesaretti. Other strong philosophical influences are Donna Haraway’s cyborg and Rosi Braidotti’s nomadic subject, reasserting the crucial role that feminist thought has played in challenging the stability and singularity of the humanist and patriarchal subject. In addition to its deep theoretical apparatus and diverse scholarly perspectives, the most significant contribution the volume makes is perhaps its emphasis on the ethics of relationality, hybridity, and multiplicity that the posthuman embraces. The vast multidirectional migratory movements of our era, which challenge the stability of national borders and identities, and are often initiated in response to ecological crises caused by the exploitative practices of agro-extractive capitalism, demand the humble decentering of the western humanistic subject and the acceptance of the entanglements of human and non-human entities, which the authors and artists discussed in this volume explore and represent in their work. The posthuman, as this volume articulates it, does not suggest a retreat from an engagement with the world – on the contrary, it shows how the posthumanities are deeply relevant to the social, political, and ecological concerns of our times.