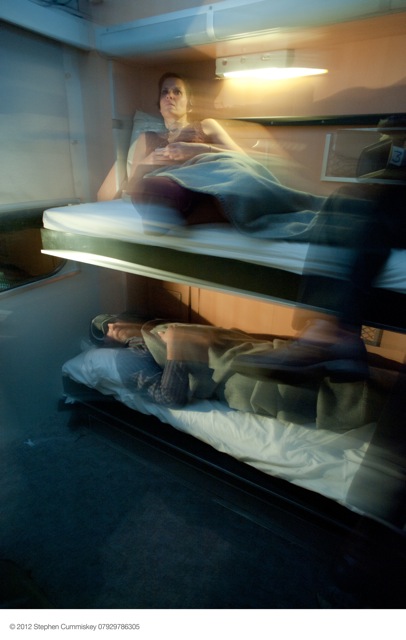 Since 2009, English theatre director Katie Mitchell has worked in Germany regularly, contributing a production to every season of Cologne’s municipal theatre, Schauspiel Köln, throughout Karin Beier’s time as its director. Mitchell’s work at this theatre has been highly acclaimed by both public and critics; two of her productions were honoured by an invitation to the Theatertreffen, the federal republic’s annual meeting for the best productions in German theatre. Reise durch die Nacht (Night Train), one of these productions, premièred on 13 October 2012 as her last in Cologne. It is based on the novel of the same title, written by the Austrian author Friederike Mayröcker and published in 1984.

Mitchell’s production shows the female protagonist’s ride on a night train from Paris to Vienna. She takes the train with her husband to attend her father’s funeral. Throughout the journey, she is haunted by fragmentary memories of a traumatic incident in her early childhood. In the course of this sleepless night that the middle-aged woman spends wandering around the train, struggling with tinnitus and starting an affair with the young sleeping car attendant, her memories become clearer. Finally, when her husband and the attendant meet in a dramatic confrontation, she is able to reconstruct the repressed memory of an evening in her childhood when her father violently hit her mother. She decides to leave the train on her own.

In order to adapt Mayröcker’s stream of consciousness-like novel (that remains comparatively vague about the precise incidents on the train ride), Mitchell makes use of the multimedia technique she has become famous for and stages Reise durch die Nacht as a live video performance. In this technique, which has been used by Mitchell in several productions, the performers produce a live video on stage that can simultaneously be seen on a screen above the stage. To do so, cameras are operated on stage by the performers. While some actors play the action – in this case either scenes on the train or memories – others operate the cameras or produce light effects. By switching from one camera to the other for the projection, different shots can be ‘cut’ together, resulting in a representation of the train ride, interrupted by ‘flashbacks’ of childhood memories. The images are accompanied by prerecorded sounds and music that are added live, as well as a voice-over representing the protagonist’s thoughts which is read from Mayröcker’s text by an actress in a sound booth on stage.

The live video produced resembles, in effect, a feature film for cinema, consisting of several hundred shots, combining a multitude of camera perspectives and positions and an elaborate soundtrack. Still, the busy and tightly scheduled process of its production is just as present: The performers rush around the stage, often changing quickly between acting before the camera, speaking in the sound booth, filming, rearranging props and positioning lights. Apart from the scenery – a real-size model of a night train including realistically refurbished compartments as well as rooms for technical equipment and for staging the memories – there are also cameras, cables, lamps and screens for projections of passing landscape visible to the audience. What would be in focus in a classical production – actors acting out a scene – often remains hidden in the stage set or covered by the production team around it. Like this, the scene serves as a stage for the actors as well as the process of producing the film itself. Given the plenitude of things taking place at the same time, every spectator has to decide individually what part of the action on stage he or she wants to follow: the acting of the scenes before the camera, the production of special effects, one performer’s way from one task to the next, or the film on the screen.

Being an intern at Schauspiel Köln when the final rehearsals of Reise durch die Nacht took place, I had the opportunity to watch this Mitchell production come alive piece by piece. The rehearsals that I attended in the course of three weeks consisted mostly of the routine of going through short sequences of the performance repetitively. Positions and movements of actors, cameras and lights were determined on the way and memorised by the performers with the help of personal notebooks. The disciplined repetitions striving for perfect timing and precision as well as the practice of allowing the performers to ‘dance through’ their parts of the choreography individually before a run-through with the entire ensemble were reminiscent of the work in a ballet studio. Even more striking about the rehearsals was the importance of technical matters. Behind the scenes, the director and actors worked closely on the character development. Even after many tiresome repetitions of the same sequences, the actors were strikingly expressive – particularly Julia Wieninger’s performance as the protagonist. Still, the acting often seemed to play second fiddle to issues of how to place cables or cameras. Phrases like «we have to get these shots right» were the most frequently heard during those weeks, leaving one with the impression that this play was going to be first and foremost about playing for the consistent flow of camera shots, rather than for the accurate character development.

Consequently, the question arises why the spectators are required to take a detour via mediatised images in order to get closer to the very intimate emotions displayed – particularly as they are indeed able to look directly at the face of the actress. To some degree, these thoughts mirror the observations on the relation between actors and audience in cinema that Walter Benjamin has previously made in his essay The Work of Art in the Age of Mechanical Reproduction. Actors playing for an apparatus instead of an audience thereby lose their presence ‘here and now’ – at first sight, this is exactly what the actors in Mitchell’s performance appear to do. But unlike the medium film that Benjamin analyses, Mitchell’s production does not bind the spectator’s view to the perspective of the camera only. Being able to see how the images on the screen are produced, he or she is no longer just confronted with a performance given by an actress, but with the process of an actress performing. The audience is aware of the fact that the emotions on stage are produced. When Julia Wieninger bursts into tears at precisely the same moment as another actor produces the effect of flashing lights across her face, she succeeds in doing it in an impressively convincing way, despite the performance’s rational setup. Naturally it is also the severe life crisis of the protagonist that is touching. But the greatest achievement of this performance is the way in which all its elements, its emotional depth as well as its technical complexity, are shaped live. According to Benjamin, the actors in Mitchell’s performance are presenting themselves to an apparatus. But in doing so, they are presenting this work to an audience – and thereby get back in touch with it. As already mentioned, the quality of this work was approved of by the jury of the Theatertreffen. The audience of the performance of Reise durch die Nacht I saw after its première received it well, too.